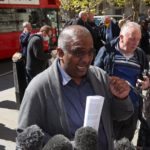 Harjinder Butoy was one of the “Post Office 39,” a group of former sub-postmasters and post-mistresses who were convicted of offences including theft, false accounting, and fraud, based on information from a computer system called Horizon which suggested that money had gone missing from post-office branch accounts.

Mr Butoy was convicted by a jury of ten counts of theft relating to an alleged shortfall of £206,376.76. He was acquitted of a further count of theft. Mr Butoy was sentenced to 39 months’ imprisonment. A confiscation order was made against him in the sum of £61,294.34, and he was ordered to pay compensation in the same sum to the Post Office.

Talking about the effects of the case, Mr Butoy said, “My wife and kids had to move in with my parents, the Post Office was shut, we lost the shop and our home and I was declared bankrupt. Our standing in the community, which we had worked so hard to establish and be well-liked and trusted, was destroyed.”